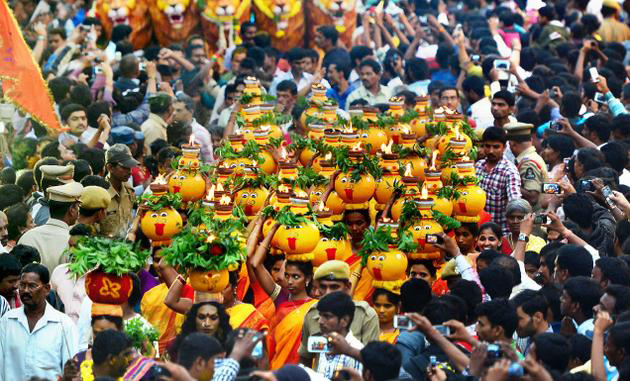 Bonalu is an important festival celebrated in Hyderabad and Secunderabad in Telangana in the month of Ashada (July – August). Bonalu means ‘food’ and is a ritual in honor of Mother Goddess – Mahankali. The ritual consists of an offering of food made to the Goddess by women which is later shared by the family and friends as ‘prasad.’ The festival is a month long affair and includes colorful processions and community feasts.

Origin of Bonalu festival: Bonalu had its origin in an epidemic of plague in 1869 in Hyderabad and Secunderabad, which killed several people. People believed that the epidemic was the result of the anger of Mother Goddess. The Bonalu ritual was started to ward-off the anger of the Goddess.

Offerings on Bonalu: The offerings consist of cooked rice, jaggery, curd, water and other dishes which are brought in the pots and are given to the Goddesses in the temples. The earthen pots are decorated with white, yellow and red colors. Majority of the women carry the pots on their head and it is believed that the women get possessed by the spirit of Mother Goddess. The offering of cooked rice, jaggery and curd in a pot is known as ‘bonam’ and is covered with neem leaves and a lamp is placed on top of it.

The month-long festival consists of various rituals like ‘Rangam’- forecasting the future, and the procession of mother goddess atop an elephant and the ‘Ghatalu’ procession.

Bathukamma is a colourful floral festival of Telangana and is celebrated by womenfolk with exotic flowers of the region. The festival has over the years became a symbol of Telangana culture and identity. Bathukamma comes during the latter half of monsoon, before the onset of winter.

The monsoon rains usually bring plenty of water into the ponds, tanks of Telangana and it is also the time when wild flowers bloom in various vibrant colours across the uncultivated and barren plains of the region. The most abundant of these flowers are ‘gunuka’ (or ‘gunugu’) and ‘tangedu’. There are other flowers like the ‘banti’, ‘chamanti’, ‘nandi-vardhanam’ etc.

The ‘shilpakka pandlu’ (or ‘sitaphalalu’), custard apples, are another great attraction during this season. The custard apple is tasty fruit that grows in the wild with little or no water and is often called the ‘poor man’s apple’. Then there is corn (‘jonna’ and ‘mokka jonna’) waiting to be harvested.

Amidst these, Bathukamma is celebrated by the womenfolk of Telangana, heralding the beauty of vibrant nature in multitudinous flowers.

The festival begins a week before the ‘Saddula Bathukamma’ (the grand finale of the Bathukamma festival) which falls two days before Dassera. The womenfolk normally get back to their parents’ homes from their in-laws and breathe the fresh air of freedom to celebrate the colours of flowers.

For one whole week, they make small ‘Bathukammas’, play around them every evening and immerse them in a nearby water pond. On the last day, menfolk of the house go into the wild plains and gather the flowers like ‘gunuka’ and ‘tangedu’. They bring home bagfuls of these flowers and the entire household sits down to arrange them in stacks.

The flowers are carefully arranged row after row in a brass plate (called ‘taambalam’) in circular rows and in alternate colours. The Bathukamma grows in size and the bigger it gets the better. The white ‘gunuka’ flowers are coloured using water paints and Bathukamma gets colourful circular layers of them along with ‘tangedu’ in between. The Bathukamma is then placed before the family deity and prayers are offered.

As evening approaches the womenfolk dress colourfully in best of their attire and adorn lot of ornaments and place the Batukamma in their courtyard. The women of neighborhood also gather in a large circle around it. They start singing songs by making rounds around them repeatedly, building a beautiful human circle of unity, love, sisterhood.

After playing in circles around the ‘Batukammalu’, before the onset of dusk, the womenfolk carry them on their heads and move as a procession towards a bigger water body near the village or town. The procession is extremely glittering with aptly dressed and decorated women and “Bathukammalu”. Songs of folklore are sung in chorus throughout the procession and the streets resonate with them.

Finally, when they reach the water pond the ‘Bathukammalu’ are slowly immersed into water after another round of playing and singing. Then they share the ‘maleeda’ (a dessert made with sugar or raw sugar and corn bread) sweets amongst the family members and neighborhood folks. They return to their homes with empty ‘taambaalam’ singing songs in praise of Bathukamma. The songs of Bathukamma echo in the streets until late night during the entire week.

Bathukamma is a celebration of the inherent relationship human beings share with earth and water. During the entire preceding week, women make ‘boddemma’ (a deity of Gowri – mother Durga – made with earthly mud) along with Bathukamma and immerse it in the pond. This helps reinforce the ponds and helps it retain more water.

The flowers used in Bathukamma have a great quality of purifying water in ponds and tanks and flowers so immersed in abundance are environment friendly.

In times when the fresh water ponds are gradually diminishing and dwindling away, it is indeed a matter of pride for Telangana that its womenfolk (with mostly agrarian background) inherently know how to rejuvenate them by celebrating the festival of flowers.

The festival heralds the beauty of nature, collective spirit of Telangana people, the indomitable spirit of womenfolk and also the ecological spirit of the agrarian people in preserving the natural resources in a festive way. 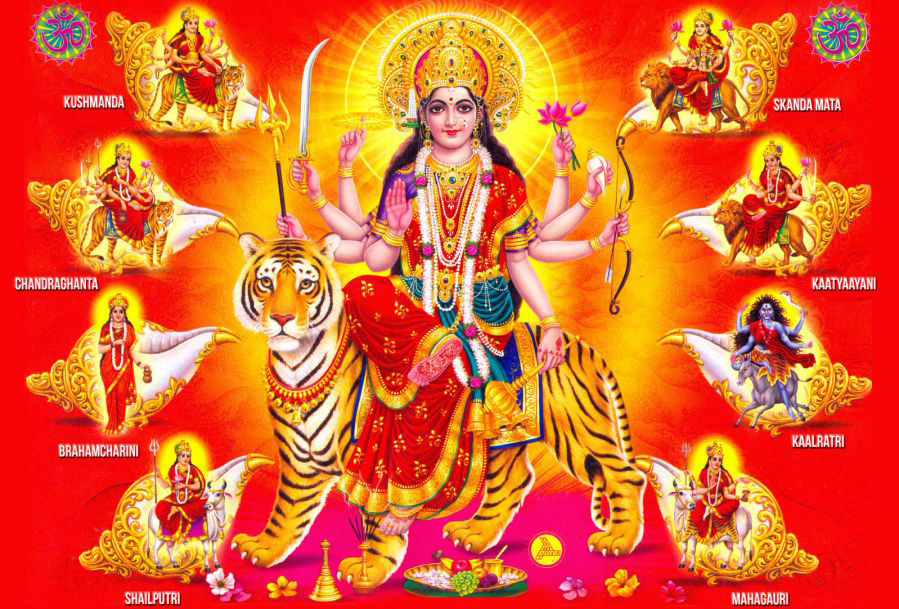 Vijayadashami also known as Dussehra or Navaratri is an important Hindu festival celebrated in Telangana. Vijayadashami, a festival that symbolizes the victory of good over evil, is celebrated with traditional fervor, devotion and gaiety across Telangana. The name Vijayadashami is derived from the Sanskrit terms “Vijaya-dashami” which means victory on the day of Dashami. Dashami is tenth lunar day of a Hindu calendar month.

According to puranas, demons, or Asuras, who were very powerful were always trying to defeat the Gods, and take control of Heaven. One Asura, called Mahishasura, in the form of a buffalo, was growing powerful and with this, he started creating havoc on the earth. The Asuras defeated the Gods under his leadership while the whole world was suffering under Mahishasura’s evil acts. The Gods then combined all their energies into Shakti to destroy Mahishasura. A powerful band of lightning, which then emerged from the mouths of Brahma, Vishnu and Shiva formed into a young and beautiful female with ten hands, which had all the special weapons given to her by Gods. This Shakti then took the form of goddess Durga and after riding on a lion, Durga fought bitterly Mahishasura for nine days and nights. Finally, during the tenth day of Ashvini shukla paksha, the demon Mahishasura was eventually defeated and killed by Durga.

The Durga temple in Warangal near Bhadrakali Lake, Basara Temple, Alampur Jogulamba Temple, one of the Astadasa Shaktipeethas, out of the 18 prominent Temples dedicated to Goddess Shakti, reverberate with manthras and are thronged by thousands of people. Sharan Navaratri is a popular festival at Alampur Jogulamba Temple, where as part of the concluding event, a Theppotsavam (boat festival) is organized, an eye-catching event held on Vijaya Dasami at the confluence of Krishna – Tungabhadra, also called Sangamam. Young women play Bathukamma around a clay pot decorated with flowers and they dance around it. This festival is celebrated with fervor across all temples of Goddess Durga in the state of Telangana. During Navaratri i.e. nine nights, Goddess Durga is adorned in her different forms and avatars like Mahishasura Mardhini, Bala Tripura Sundari, Raja Rajeshwari, Annapoorna, Kali, Kanaka Durga, Lakshmi, Saraswati and Gayatri Devi.

This is the time when most of the people living in Hyderabad and urban regions of the state head for their ancestral homes in rural areas and hinterlands. The villages in Telangana come alive with vibrant celebratory hues. Dussehra is also the occasion in Telangana when the newlyweds are invited by the bride’s family and are offered gifts and accorded special care.

Students usually keep their books and workers clean their tools for the purpose of puja on the ninth day of Navaratri, called Ayudha Puja which are then taken back, after puja on the tenth day i.e. Vijayadashami. Women and children organize ‘Bommala Koluvu’, which is a special arrangement of dolls and toys, aesthetically accompanied by flowers as well as lamps. Saraswathi Puja is also performed by many Telangana families for initiating their children into education since Vijayadashami is considered highly auspicious for this purpose. In Hyderabad city, devotees also immerse large idols of the goddess in the famous Hussain Sagar Lake, after worshipping her with devotion during the nine-day long festival.

Telanganites worship Jammi tree to celebrate the Pandavas victory. Pandavas stashed their astras (weapons) on the Jammi tree during their 13th year of exile. This bundle of weapons looked like a corpse and was guarded by a snake. The Pandavas retrieved them on the sacred Vijaya Dasami day. So, on this day Ayudha puja (prayer to tools or weapons) is performed. (Tools, books, vehicles and appliances etc. are worshipped). People go to Jammi tree on this day and recite the following sloka and also write it on a piece of paper and attach it to the tree: